Wakanda’s precious Kimoyo beads are at your hand, allowing access to Black Panther‘s secret communication field with this exquisite glass bead bracelet by That Ankh Life. A blue prime bead holds a lifetime of knowledge.

Magic in the details 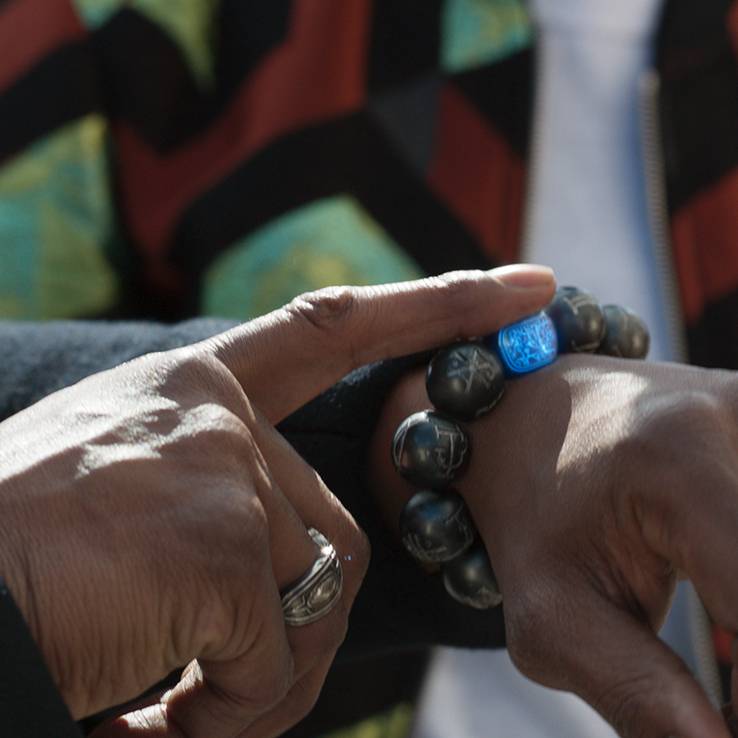 The exact location of Wakanda has varied throughout its comics history, but the movie features a zoom in from space that places it somewhere around Rwanda. Aiding its isolation from the rest of the world, new comics explain the country is bordered by “hills, mountains, and the sprawling Lake Nyanza.” (In the movie, it’s also protected by a hologram that hides its capital city from outside eyes.) Wakandans have their own language, which is “played” in the movies by Xhosa, a Bantu language spoken in South Africa. (South African actor John Kani, who plays T’Challa’s father, T’Chaka, came up with the idea while filming Captain America: Civil War.) To make things easier for subtitle-averse viewers, pretty much everybody in the movie also speaks English.

Isolation
As Carvell Wallace wrote in the New York Times, what makes Wakanda so attractive is the fantasy of an African nation untouched by colonial influence. (Director Ryan Coogler say he based aspects of his version of Wakanda on Lesotho, which was able to resist both the Zulus and the Boers, and was only lightly colonized by the British.) Wakanda zealously guards its borders, and its comics history is filled with failed invasions from neighboring tribes, 19th-century European mercenaries, and Nazis. It refuses to trade with other nations, though as one line in the movie makes clear, Wakandans are still able to consume American memes. As we see in a Western television broadcast in the movie, Wakanda is able to get away with this by masquerading as an impoverished third-world country, and since the country’s leadership refuses to take international aid, the rest of the world doesn’t ask too many questions.

Vibranium
Fundamental to Wakanda’s self-sufficiency is its supply of vibranium, which nearly every character in Black Panther helpfully explains is “the strongest metal in the world.” Wakanda is the only country on Earth that has it, thanks to a vibranium-filled meteor that crashed into its lands thousands of years ago. You don’t need to know too much about the science of it except that vibranium is able to absorb kinetic energy and release it later, and the near-inexhaustible supply of it has made Wakanda the most technologically advanced nation on Earth. (In the comics, Wakanda split the atom decades before the U.S. did, and it’s got a cure for cancer that it’s not sharing with anyone else.) Thanks in part to its decision to only export scant amounts of the metal — which is how Captain America got his vibranium shield — Wakanda has been able to avoid the resource curse, and the kingdom seems to have put a portion of its riches aside to fund a comfortable social safety net. And though Wakanda’s mostly painted as a techno-utopia, both the movie and the comics are very interested in the question of whether its tradition of self-preservation through isolation is morally right.

History and Politics
You want a foundation myth? You want a legendary hero? Wakanda’s got both. According to a legend outlined near the start of the movie, the land that would become Wakanda was originally inhabited by five different tribes (pared down from 18 in the comics). After the meteor hit, the leader of the Panther Tribe was visited by the panther god Bast, who instructed him to drink from the Heart-Shaped Herb, a flower that was affected by the impact. The flower gave him superpowers, which he used to unite most of the tribes under his rule. (In both the comics and the movie one of the tribes, the White Gorilla Cult, lives separately from the rest of them, though the reason why differs.) This leader’s line continues today in T’Challa, who is both the superhero Black Panther and king of Wakanda.

You might think that strange cats distributing drugs is no basis for a system of government, but the Wakandan people do have a sort of veto power — any citizen can challenge the king to a duel, and if they win they get to be the king. It’s a good gig: Besides the whole superpower thing, the king also has a squad of all-female bodyguards, the Dora Milaje, as well as a shadowy secret police, the Hatut Zeraze, also called the “Dogs of War.” (In the comics, the Hatut Zeraze dress in all white, but the movie gives them more traditional spy gear.)

The king of Wakanda seems to be something like an absolute monarch, though he does have a council, the Taifa Ngao, made up of representatives of the various tribes. Wakanda’s comics history has been full of threats to T’Challa’s rule, and Ta-Nehisi Coates’s recent run introduced a popular revolt against the monarchy. I won’t spoil exactly how things played out, except to say the uprising eventually had an effect on Wakanda’s political structure. Maybe.